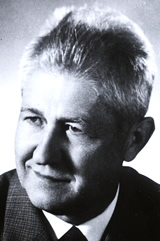 Leon Roppel was born in Wejherowo on September 12, 1912 in a Kashubian family, but his roots were partly German (his mother was nee Schröder). He graduated from the local primary school and junior high school. King Jan III Sobieski. Even then, he was actively interested in the Kashubian culture. In 1933, he began studies at the Jagiellonian University (German and Slavic philology) and established cooperation with Pomeranian newspapers. Thanks to the archival privilege he found, he received a scholarship from the mayor of Wejherowo, Teodor Bulduan, for talented students. He wrote a column entitled "Piętów Tóna godo". In later years, he published a lot in "Gazeta Gdańska", "Rodzina Kaszubska" and "Klëka" from Wejherowo. Sometimes he used the pseudonym Józef Larski.

He collected and was inspired by the folklore of Kashubia, he also tried to avoid political conflicts and reconcile Kashubians with Poles. He considered the Kashubian language a dialect, and the Kashubians as a Polish tribe. In his works, he emphasized comprehensibility, used simplified spelling and natural vocabulary, and did not experiment. He represented the Polish philosopher's orientation among Kashubian activists. Shortly before the war, he wrote the book Na Jantôrowym Brzegu. Powiôstki Kaszebskié. Dzél I ”, published in Wejherowo in 1939 and later burnt down by the Nazis on the market there. One of the few surviving copies is in the possession of the Museum of Kashubian-Pomeranian Literature and Music in Wejherowo.

In 1939 Leon Roppel also started working as a German teacher at a school in Kresy. He spent the war years abroad - he worked as an accountant. He returned to Sopot and worked for radio Gdańsk. He published in the regional press, incl. in "Zrzeszy Kaszëbska". In 1945 he completed his German studies at the Jagiellonian University and married Maria Makowska. He also worked as an accountant, he also moved to Gdynia Orłowo. He had a son and a daughter who devoted themselves to a university career.

At the end of 1955, together with Jan Piepka, he wrote and published the first Kashubian book after the war - the collection Our page. A selection of Kashubian poems and stories ", published under the pseudonyms" Piętów Tóna - Staszków Jan ". The introduction to the book was written by Lech Bądkowski, 3,200 copies were printed. A year later Roppel took part in the founding of the Kashubian Association and became a member of its authorities - he was a member of the audit committee, he also co-founded a branch in Gdynia, wrote for the biweekly "Kaszëbë". In the early 1960s, he defended Kashubian activists A. Labuda, S. Bieszek and J. Rompski, accused of separatism.

In the Association, the writer devoted himself to publishing and in the years 1956-1958 he prepared works including F. Sędzicki, A. Majkowski and J. Karnowski. They were published by Wydawnictwo Morskie in the series "Kashubian Library", which Roppel edited. He also published his own collection "Orzechë do ucechë abo pół tësąca Kaszëbskich zagôdk" (Gdańsk 1956, 2,000 copies) and "Songs from Kashubia" in a musical arrangement by Władysław Kirstein and with an introduction by prof. Andrzej Bukowski (Gdańsk 1958). At the beginning of this collection, he placed his most popular composition "Z piesniu do Cebie jidzemë, Mateńko!" This book had 8 thousand. effort.

L. Roppel also worked a lot in science. He was a member of, among others Polish Nautological Society, the Baltic Institute and the Gdańsk Scientific Society. In scientific journals he wrote about the culture of Kashubia, incl. about beliefs. Already in 1955, he wrote the work "Historical review of works on Polish maritime vocabulary". In the early 1960s, he began teaching German at the Maritime University in Gdynia and the Pedagogical University in Sopot, later the University of Gdańsk. There he worked until his retirement (1977). But he often returned to Wejherowo, incl. in 1968 he was a juror at the 2nd National Song Festival of the Sea in Wejherowo. It inspired the name of the festival's main award - the Golden Sail statuette.

Throughout his life, Leon Roppel wrote Kashubian poems and stories, published collections of folklore and anthologies, and disseminated Kashubian literature abroad. He developed, inter alia, harvest "Ma jesma from the sea. Kashubian poetry and prose about the sea ”(Gdańsk 1963, 700 copies),“ From the books of wisdom of the seas. 13 Century of Kashubian Proverbs and Phrases about the Sea ”(Gdańsk 1965, no data on circulation) and“ A selection of contemporary Kashubian poetry ”(Gdańsk 1967). He wrote, inter alia, short dramas "Harvest" and "The Sailor of the Golden Sun". The Departure of Jan z Kolna (1949), which also became the libretto of the opera by Jan Michał Wieczorek, the work Where Truso Lied (1970) and two short biographies: Florian Ceynowa. The creator of Kashubian regionalism "(Gdańsk 1967, 1500 copies) and" The Victory of Songs. About Lubomir Szopiński ”, a Pomeranian conductor and composer (Gdańsk 1970, 1000 copies). In the busy year 1970 he was awarded the Stolem Medal.

In the 1970s, Leon Roppel conducted his many-sided scientific and journalistic activity. Including he was a member of the Kashubian spelling commission and received the Kashubian-Pomeranian Association award in 1974 for his work in it. In 1976, "Victory of the Song" was resumed, also in a circulation of 1000 copies. Later L. Roppel published a popular collection "Dykteryjki i historjki z Kaszuby" (Gdynia 1977, 10,000 copies). He did not manage to complete all his plans. He had a heart condition and died in full creative power on May 12, 1978 in his home in Gdynia Orłowo. He was also buried at the local cemetery, and a posthumous sketch about the writer was published by L. Malicki. Part of the L. Roppel archive is kept in the Library of the Polish Academy of Sciences in Gdańsk.

On the 10th anniversary of his death in Gdynia, a plaque in memory of L. Roppel was installed. In 1988, a collection of his works entitled "With a song to Cebie jidzeme, Mateńko". And on June 12, 1992, on the day of the inauguration of the Second Kashubian Congress, his name was given to the Communal Public Library in Luzin, about which L. Roppel wrote in the short story "Ancëkrëst w Lëzën". There is also a small Roppla street (the only one in the country). The plaque on the library building reads: "Leon Roppel / 1912-1978 / Pisarz Redaktor Edytor". Below is a poem by the patron of the facility.

Full history of the library

This website uses cookies to provide services at the highest level. By continuing to use the site, you agree to their use.